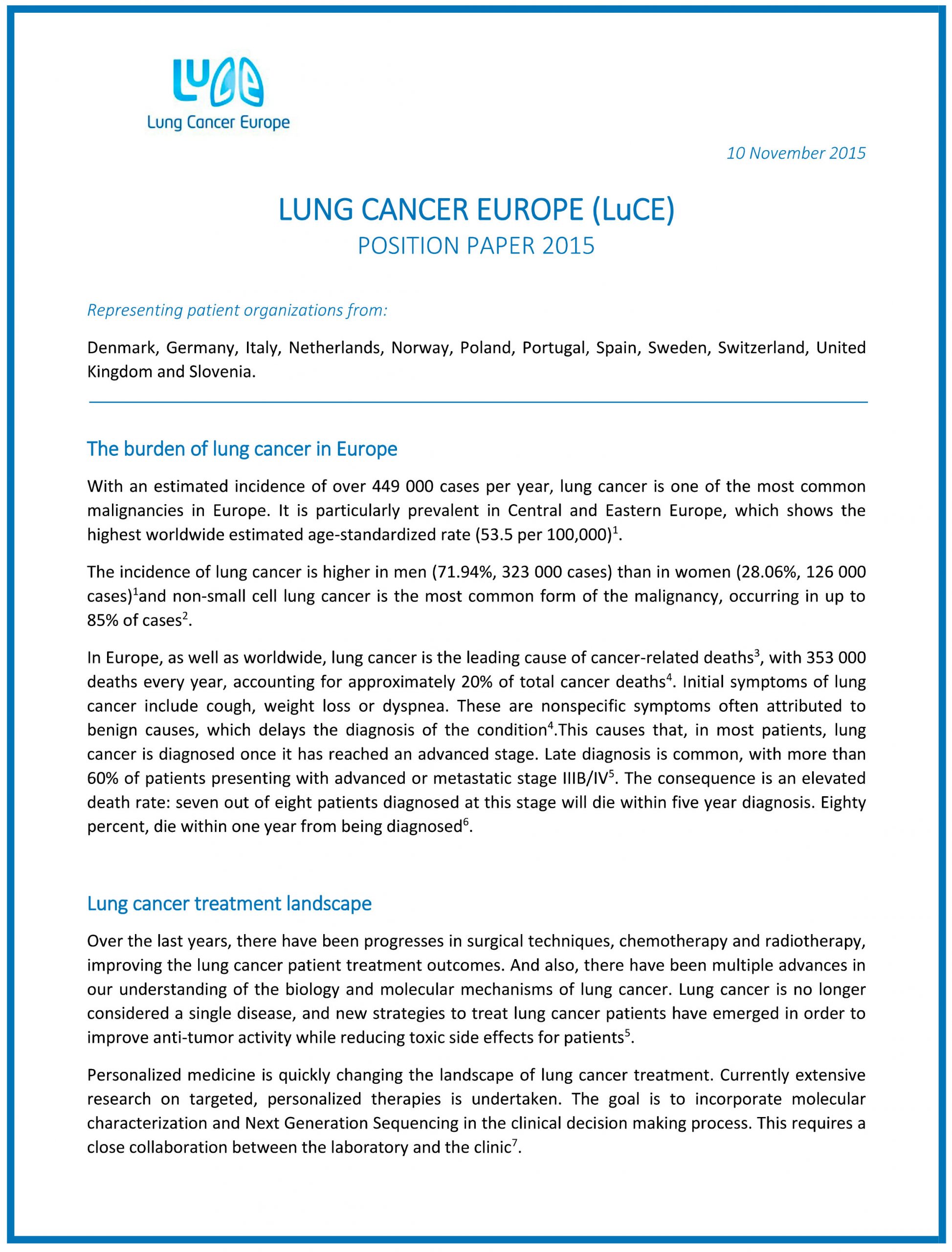 The burden of lung cancer in Europe
With an estimated incidence of over 449 000 cases per year, lung cancer is one of the most common malignancies in Europe. It is particularly prevalent in Central and Eastern Europe, which shows the highest worldwide estimated age-standardized rate (53.5 per 100,000)[1].

In Europe, as well as worldwide, lung cancer is the leading cause of cancer-related deaths[3] with 353 000 deaths every year, accounting for approximately 20% of total cancer deaths[4]. Initial symptoms of lung cancer include cough, weight loss or dyspnea. These are nonspecific symptoms often attributed to benign causes, which delays the diagnosis of the condition[4]. This causes that, in most patients, lung cancer is diagnosed once it has reached an advanced stage. Late diagnosis is common, with more than 60% of patients presenting with advanced or metastatic stage IIIB/IV5.
The consequence is an elevated death rate: seven out of eight patients diagnosed at this stage will die within five year diagnosis. Eighty percent, die within one year from being diagnosed[6].

Lung cancer treatment landscape
Over the last years, there have been progresses in surgical techniques, chemotherapy and radiotherapy, mproving the lung cancer patient treatment outcomes. And also, there have been multiple advances in our understanding of the biology and molecular mechanisms of lung cancer. Lung cancer is no longer considered a single disease, and new strategies to treat lung cancer patients have emerged in order to mprove anti-tumor activity while reducing toxic side effects for patients[5].
.
Personalized medicine is quickly changing the landscape of lung cancer treatment. Currently extensive research on targeted, personalized therapies is undertaken. The goal is to incorporate molecular characterization and Next Generation Sequencing in the clinical decision making process. This requires a close collaboration between the laboratory and the clinic[7].

Key challenges in lung cancer care
Early diagnosis
Lung cancer is a curable disease if it is detected early enough. The most effective treatment is surgery[8] but this requires early diagnosis. Late diagnosis not only strongly affects survival rates, but it also has an mpact on the quality of life of patients and their caregivers. It also increases the economic costs of lung cancer management.

Avoidable delays in diagnosis occur and, for example, there is evidence that delays in referral from primary care play a part in this[9]. Three lines of action can be undertaken to ameliorate this situation. On one hand, efforts should be made to reduce the time between primary care consultation and the beginning of the treatment[10]. On the other hand, action must be taken to improve awareness and knowledge about lung cancer symptoms among the society, helping the recognition of symptoms in early stages. Finally, another key issue to avoid delayed diagnoses is improving screening and diagnosis program for people at risk.

Accelerating lung cancer diagnosis is the key to improve treatment outcome and survival rates. This should be faced in a multi-method approach, involving health authorities and other stakeholders.

Knowledge of tumor molecular diversity has opened a new scenario for lung cancer treatment. New agents and novel strategies for the treatment of this disease have transformed the patient´s outlook in terms of survival and quality of life. Personalized medicine and immunotherapy are holding a promising role in the treatment of the disease, and now molecular testing is becoming an important part of the
clinical decision process.
However, Lung Cancer Europe has registered inequalities in the access to genetic and molecular testing and innovative treatments within and across European countries. These inequalities include differences in protocols for diagnosis and treatment, market access delays, high price of drugs, regionalization of health systems, and differences in the process of assessing innovative therapies. These are the most relevant factors conditioning the quality of lung cancer treatment in Europe

Molecular testing and analysis of the patient´s genetic background allows personalized treatments that improve prognosis. However, important differences in the access level to new therapies have been observed between Member States, especially in Eastern countries. Lung Cancer Europe supports the rights of patients to access the most effective tests and therapies available.
Lung Cancer Europe encourages the European Commission to:

Research and development of new medicines

Despite advances in diagnosis and treatment, lung cancer still causes 20% of total cancer deaths. With a 5-year survival rate of 11.2% for men and 13.9% for women, lung cancer is the leading cause of cancerrelated deaths in Europe[4].  Lung cancer is also associated with high associated co-morbidity, which considerably reduces patient´s quality of life[11].
Considering the low rates of survival and the high morbidity, more coordinated research to control lung cancer globally is urgently needed, covering all fields from basic to clinical research.

Lung Cancer Europe urges public and private actors to engage in basic and clinical research, in an effort to improve survival rates and improve the quality of life of lung cancer patients.

Lung cancer patients and their caregivers are being under a lot of stress. In most cases they are overwhelmed by the diagnosis and have to cope in the new situation which affects their life in many dimensions. They tend to be left alone with the problem.
It is very important to support the patients and their caregivers with the basic psychological help when coping with lung cancer diagnosis and the changes it caused in their life.
It is also crucial to train the doctors on how to talk to patients in such situations. It is very important to be able to build an open relationship between the patient and the medical help, which will affect the effectiveness of the therapy and the psychological health of the patient

CALL TO ACTION: the role of The European Commission

Lung Cancer Europe calls on the European Commission to: